Women in Horror: I Am Not Your Final Girl by Claire C. Holland 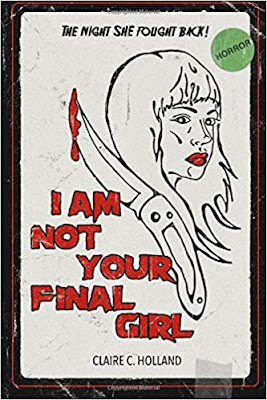 I Am Not Your Final Girl is a poetry collection, each poem from the point of view of a woman in a horror film from final girl heroes to (seemingly) monstrous villains and everything in between. Claire C. Holland skillfully captures each character, their mindset, and their emotions completely. They are sorted into four categories: Assault, Possession, Destruction, and Transformation.

The introduction of the book contextualizes the collection with Holland's feelings about the current state of affairs in the United States with the Trump presidency and the resulting and increasing attacks on women physically and in legislation. Women's bodily autonomy is constantly debated and, by extension, so is our humanity. She sees final girls and real life women willing to stand up for their rights as those to look to, emulate, and help us deal with our darkest moments. Through this lens, Holland takes characters in horror films and makes them more than the trope they fall in or often how they are portrayed onscreen.

In the section titled Assault, women survive or succumb to many different types of assault. Holland takes their conflict in the film and relates it to things that women experience every day. Rosemary from Rosemary's Baby (1968) shows how her husband, who gave her up like an object, is worse than the Devil himself. Carla from The Entity (1982) points out how doctor's don't believe her about her condition or how much pain she's in, which is a typical experience for many women with fatal results. Sara from The Descent (2005) describes her mindset at the very last scene of the film, where she is surrounded by creatures and haunted by her daughter and the sins of her past. Holland perfectly articulates the feeling behind Sally's maniacal laughter at the end of The Texas Chainsaw Massacre (1974)  in the back of the pickup truck, glad to be alive but not sure if she can continue. My favorite of this section is Laurie Strode from Halloween (1978), who shows that this situation of men killing women happens literally everywhere and that she is just trying to live her life.

The second section titled Possession has some unexpected entries. Bea from Honeymoon (2014) puts her story into her context, where her husband is frightening of change in his new wife and also changing to be continually interrogating her and abusive. Shideh from Under the Shadow (2016) focuses on her lost career and how women are meant to give up everything they are when they become mothers, leaving parts of themselves to rot with disuse, while men are exempt. Nola from The Brood (1979) is also focused on society's view of motherhood as the most important thing in the world contrasted with society's treatment of mothers. Ginger's poem from Ginger Snaps (2000) is my favorite. People surrounding her viewed her as sexually available with their catcalls, gossip, and name calling. When she became sexual and embraced it, she became a monster in their eyes. This poem in particular captures the entire film and its message an only a page or two.

The third section title Destruction includes many characters deemed as monstrous. Francisca from The Eyes of My Mother (2016) and May from May (2002) both want to connect with people. While Francisca bathes her dead father and mourns her lost connection, May collects parts like cloth scraps for a new friend and longs to be truly seen. Amelia from The Babadook (2014) thinks of murderering her child and freeing herself from the burden, something women might think of if parenting isn't what they expected or wanted. India from Stoker (2013) is titillated by her own expression of violence. Elsa's poem from Splice (2009) really changed my view of the film. I hadn't really liked it and found it problematic in many ways. However, this view of the creature reminds me more of Frankenstein, where men are obsessed with mothering, giving birth, and creating monsters to do the horrific things they simply can't. She longs to remake the world in her own image in return.

The fourth section titled Transformation has some less obvious choices that focus more on interior rather than exterior transformation. One of the contentious scenes in Black Christmas (1974) is when Jess remains in the house even though she was told the killer is there. Her poem shows how she isn't satisfied waiting outside to be saved and has to do what she can to save her friends. Mia from The Evil Dead (2013) also has the strength to fight for and save herself. Dana from The Cabin in the Woods (2011) refuses to be sacrificed for a broken world and braces herself for whatever changes that brings. Carrie (1976) rejects responsibility for original sin heaped upon her and fights back covered in blood. Clarice from The Silence of the Lambs (1991) finds it hard to tell the difference between men and monster since both look at her while stripping her down. Selena from 28 Days Later (2002) rejects the military's effort to rebuilt society with rape when that world is already gone.

I Am Not Your Final Girl is not something I would normally seek out. I am not the biggest fan of poetry, but so many reviewed it favorably that I had to read it. I have never been so emotionally affected by poetry. Claire C. Holland masterfully captures each character as they are in the film and relates their experience to women today, whether it be in surviving emotional or physical abuse, being ignored, rejecting the status quo, not fitting into society's view of women, or long for some sort of connection. I was happy to see new perspective of films from the point of view of the character and so much variety in the film choices. I will eagerly read whatever Holland writes next.